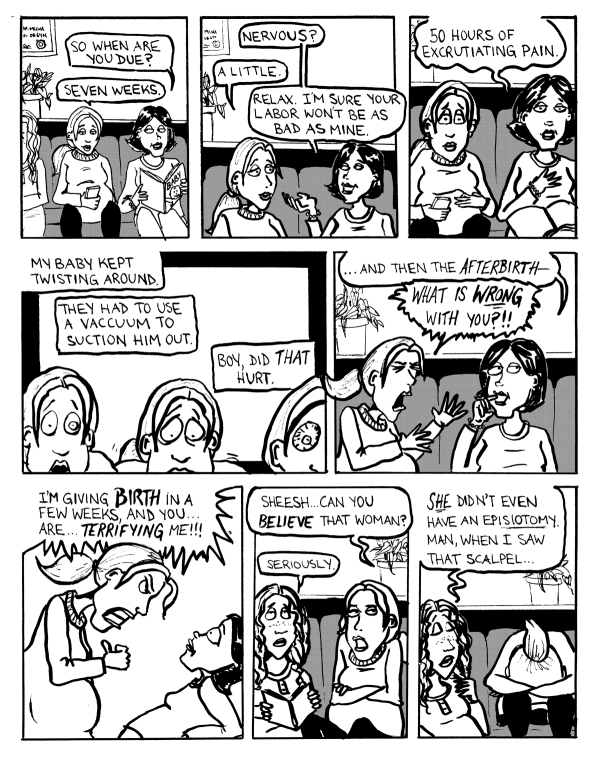 What’s the story?  How did you two meet?  I love that bar.  Well, it’s a good thing they didn’t cut you off.  How did he propose?  He put the ring at the bottom of the breadstick basket at the Olive Garden?  So romantic. Where did you get married?  I know that place; my neighbor’s orthodontist’s son got married there.  I’ve never been, but I hear it’s nice, if you like things that cost money.  How did you find out that you were pregnant?  You barfed during a Dave Matthews concert?  But how did you know it was the pregnancy?

No one wants to hear your childbirth story.

No one cares how many hours you were in labor, or if you remembered your breathing techniques, or what color your amniotic fluid was.  If you even mention the word “episiotomy,” women’s reproductive organs shrivel up and die.  The only people who will ask about it are other mothers who want to one-up your story with their own traumatic tales, or the mothers who then demur about how they only had to push for ten pain-free minutes.

Now, most of my knowledge about childbirth comes from television.  I know that I need to have my hair and make-up done before entering the hospital in case my doctor looks like an A-list actor.  I know that labor only lasts as long as a Queen song.  I know that my baby will come out squeaky-clean, and approximately the size of a six month old.

One night, I was painfully set straight when I hung out with my friend Lori and her group of new mothers.  The topic inevitably turned to childbirth, and the night became “Survivor: Pregnancy Edition”.  Each tale was more gruesome and incredible than the last, with mothers emerging as triumphant battle-scarred warriors.

“I had to push for three days.  The pain was excruciating,” a mother of a 6-month old shared.

“Um, could you have gotten an epidural?” I asked innocently.  She looked at me as if I had suggested that she should smoke crack during labor.  My friend Lori, who had had an epidural, remained quiet.  When pressed, she insisted that it was administered “against the wishes of her birth plan,” which I know is false, since her birth plan included the phrase “knock me out and wake me when it’s over,” as well as a request for Roy Rogers fried chicken to be fed to her immediately after the cord was cut.

Another woman piped in: “I know someone who had an epidural, and her labor lasted for two weeks.”  This definitely seemed unlikely, but it awed the group into silence, each woman thinking that she would never get an epidural (except for me, since two weeks of pain-free labor sounded better than two days of wishing I was born a man).

As stories emerged involving vacuum suctions, giving birth during a pilates class, pincers, and pots of boiling water, I realized that there was no good way to have a baby.  Considering women have been going through this since the time Eve found herself eating apples for three, I am astounded that technology and science have not found a way to make this less traumatic for us.  No matter what method we use to have this baby extracted from our insides, we all share the common bond of not enjoying childbirth.  At all.  And wanting to relay that story to the college kid sitting next to us on the bus.

So I am hoping that when my time comes, I will push for ten pain-free minutes, my amniotic fluid will be rainbow-colored, and my doctor will be played by George Clooney, circa 1995.

4 thoughts on “Why I Never Plan to Give Birth”

We're turning pages--and writing about them!

It's just the beginning... by Ali Solomon